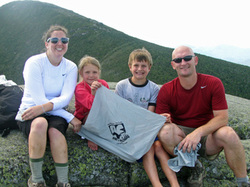 $5000 Raised for the Adirondack Scholarship Foundation

Renowned camp winter Forty-Sixers Eric Bauer and Dan Herbert scrambled over the final boulders of Saddleback Mountain, reaching the summit at 3:18 pm, on Saturday, August 20.  Their ascent was the 46th and final of the day for Pok-O-MacCready, as camp family members were successful in 11_Macomb1reaching all of the Adirondack High Peaks in one day for the second year in a row.
“It wasn’t as easy as last year,” said event organizer Tim Singer.  “We had to do a bit of 11th hour shuffling and it was thanks to climbers such as Bauer and Danny Boy- who not only did Saddleback, but the rest of the Upper Range and Marcy- that we were able to pull this off again.”

Singer added that the weather was “a key factor in our success”, with warm, but dry conditions throughout the climbing day.  In fact, the day of summits was actually a little under seven hours, from the time the Ambrose group reached the top of Macomb (left), to the final ascent, on Saddleback. (See list of summit times, and hikers BELOW).  2011 marked the third time that the camp family succeeded in climbing all 46 in one day, following 1992 and 2010.  The camp family has managed to climb at least 40 peaks in every.

For the second time in ten 46-in-a-Day events, a climber completed the personal 46ers.  Former camper Natalie Whitney (right) reached the summit of Colden at 12:15 pm- camp’s 24th of the day, and Natalie’s 46th overall, to become the 340th member of the Pok-O-MacCready family to complete the quest (see full list HERE).

As always, the 46-in-a-Day served as a fund raiser for the Adirondack Scholarship Foundation.  The totals are still being added up but, at last count, over five thousand dollars was pledged to financially assist children in attending summer camp.  “Another great year for our fund raising events,” said Singer.  “Between the Patch Sprint and this, we have probably added four or five scholarships to next year’s tally.  We are so appreciative to everyone who took part in either, or both of these events.”

Levine Assumes Presidency of the ADK Scholarship Foundation (May, 2011)

Levine, 50 from Wellsley, MA, is just the second ever President, replacing Foundation founder and Pok-O-MacCready camp owner Jack Swan.
In naming his replacement, Swan noted, “Peter and I have always had a great working relationship.  His success in the business world, combined with his passion for camp, made him an obvious choice to guide the growing foundation.”

Levine feels that “It is an honor to have been selected as the next President of the ADK Scholarship Foundation.”  Furthermore, he promises to “preserve the history and tradition of the foundation, while at the same time move the bar higher in terms of fund raising, new programs, and uses of technology.”

Over the past decade, Levine has served as an advisor and board member to the foundation, helping to grow both the organization’s endowment, and annual scholarship awards.

Larger than expected.  That’s the way to sum up both the turnout for Pok-O-MacCready’s 105th reunion, and the generous giving to the Adirondack Scholarship Foundation that took place during the reunion.  Among the multitude of activities and events that were staged during the reunion were two designed as fund raisers:

Hot of the success of his annual pre-camp staff auction, Ken “Squeaky” Herz increased the goals, and quality of merchandise for his reunion affair.  By way of a two-day silent auction, to go along with a live auction held during the banquet, Herz was able to raise nearly four thousand dollars.

“A lot of that came by way of the quilt raffle” said Herz.  “Reunion Director Tim Singer donated all of his camp T-shirts (about 20) and another staff member, Isa Kreigskotte, made a gorgeous quilt.  We raffled of tickets at $10 apiece, and raised $800 from it.”

In a funny twist to the story, the quilt raffle (left) was won by Jody Edwards, who in turn gave the quilt back to Singer.  Singer then awarded it to his reunion assistant, Erin Debusk for her hard work in helping to organize the event.

“I was nervous about the auction going in, but it turned out to be a huge success,” summed up Herz.  “I couldn’t have done it without the help of my sister, Viv Mosby; the donations from camp alumni, not to mention all of the spirited bidding.” 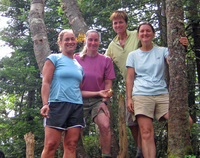 For the reunion year, a variation of the annual 46-in-a-Day fund raising event was held.  Billed the “46er Challenge”, camp attempted to climb all 46 Adirondack high peaks during the course of the reunion.

“We knew it would be a real challenge this year because, unlike other years, the focus was on the reunion, not the hiking,” said event coordinator Scott McIntyre.  “However, we did manage to climb 42 or the 46, and some of hikers- Wally & Macky Young, Jim Kobak, Cole Starkey and the Gonzalez family to name a few- really committed themselves to climbing a bunch of peaks.”

Equally as committed, were the hikers dedication to raising money for the Adirondack Scholarship Foundation.  “We took in over three thousand dollars,” said McIntyre, who also serves as camp’s financial director, “and that amount may be matched by one camp alumnus!” 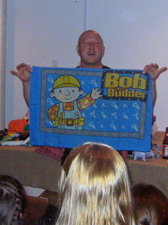 Willsboro, NY; June 30-- In general, the typical Pok-O-MacCready staff member does not reside in the upper income bracket on the economic scale.  That fact, however, did not prevent the 60 or so members of the 2009 camp staff from giving generously to a worthwhile cause.

This past Friday night, camp counselors, specialists, support staff, administrators and friends gathered at the North End Tavern for the annual Pre-camp staff auction.  The event, held prior to the arrival of the campers, is organized by Ken “Squeaky” Herz, who not only solicits the collection of the items, but acts as auctioneer. “We started this several years ago,” said Herz, “mostly as a means to give away some clothing to counselors who had traveled a long distance to get to camp and sometimes had no more than a few shirts and shorts.”

While staff members still donate most of the items, their main function is to serve as bidders and buyers.  Not to mention models (left).  “We not only sold clothing,” Herz continued, “but also services.  Two counselors volunteered to give massages; that brought in over fifty dollars.  And our largest selling item of the night was a set of custom coffee mugs made by our pottery instructor, Kelly Shiulaz, which brought in one hundred dollars.”

SENDING A CAMPER TO THE THREE-WEEK SESSION

The $1,610 collected Friday evening is being earmarked towards sending an area child to camp for the 2009 three-week (2nd) session.  “We’re still a bit short of the tuition amount,” voiced Herz, “but I have no doubt we can raise the remaining funds necessary to send someone as at least a day-camper, if not an overnight camper.  Amazing that this was done thanks to our staff!”

Furthermore, according to Herz, an anonymous donor has also approached him for the purpose of sending a local child to camp.  “This person may match what we earned at the auction, or offset the difference.  Whatever the case, this is great news.”

Plans are already well under way for a second auction, scheduled to take place Friday, August 21, during the Pok-O-MacCready 105th Reunion.  Details will be released in the coming weeks.
©2023, Adirondack Scholarship Foundation, Inc. - adkscholarship@gmail.com - 802.578.3520