IMPORTANT UPDATE:  Thanks to the generosity of hundreds of donors - both friends and family of the Fischers and Pok-O-MacCready Camps - THE DOUGLAS FISCHER MEMORIAL SCHOLARSHIP is - as of 2018 - OFFICIALLY DESIGNATED AS "PERPETUAL" .  This means that a Fischer Scholarship recipient will be able to attend camp every summer, with the foundation picking up full tuition. 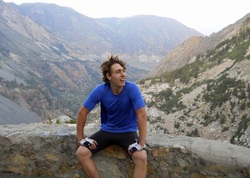 "Pok-O provided Douglas with happiness, laughs, love, confidence and the special Pok-O spirit that fills the camp but cannot be adequately explained."                    - The Fischer Family

Longtime Pok-O-MacCready camper, and first-year counselor, Doug Fischer passed away suddenly on May 17, 2014.  Calling camp a "home away from home," the Fischer family is honoring Doug's memory with a perpetual scholarship.  Here is a statement: 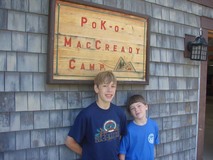 Doug, with younger brother Travis
Douglas was nine when he first arrived at Pok-O. Growing up, he had heard Pok-O stories and songs from his older sister, Pamela, and cousin, Merrie. Doug’s first Pok-O summer was magical, and he now was able to add his own stories to further the family’s traditions at the camp, which started in 1995.

Douglas loved everything about Pok-O - archery, baseball, blacksmithing and swimming. Douglas made friendships that were deep and enduring. He loved Revolutionary War games and, of course, Indian Days. Doug was an Onondaga and honored to be the Chief. 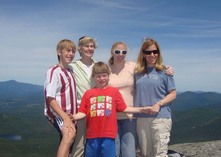 Three generations celebrating Doug’s 46er finish
Most important to Douglas was the discovery of the glorious Adirondack Mountains. He often spoke of the mountain views and, almost immediately, became determined to climb all 46 high peaks. It took him four summers and he climbed his last high peak on August 9, 2008 becoming a 46er, (#6066), on Wright Peak.
It was one of the best days of his life and it was shared with his grandmother, mom, brother and sister.

Doug was also there on Phelps Mountain to celebrate and cheer as his brother Travis became a 46er in 2010.